Employment Law Update: What you don't know CAN hurt you

HR directors and employers will want to ring in the new year with a free employment law update and breakfast given by our partner, Liza Getches.


To register online for this event click here, then click the "Register Now" button (Registration deadline is 31 January 2013).  We hope to see you all there! 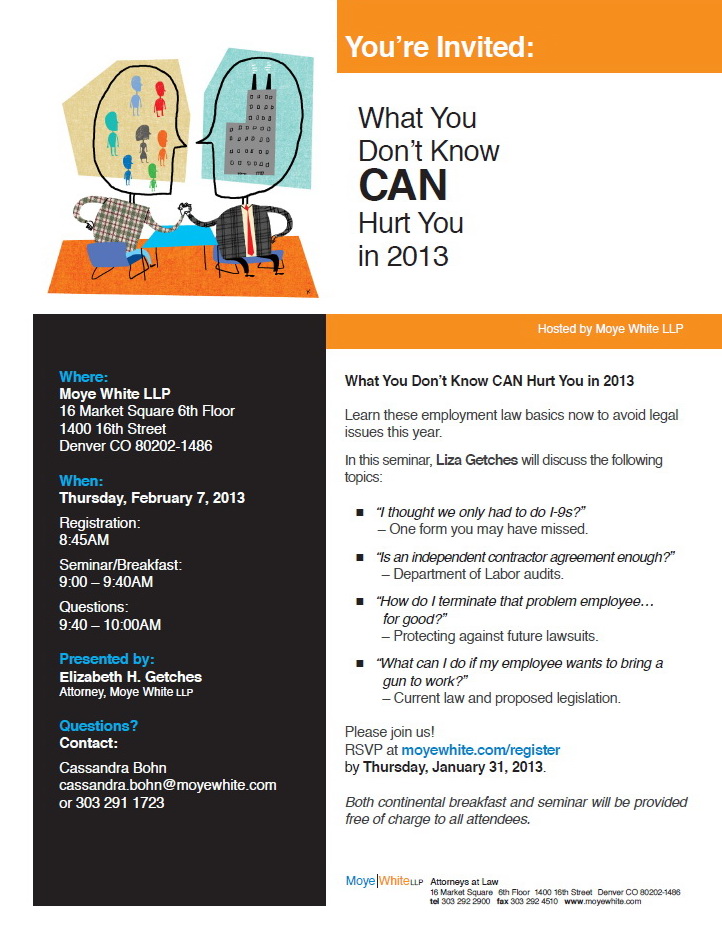 In early June 2012, the United States District Court for Massachusetts issued a summary judgment ruling which expands and applies the precedent in the Coverall employee-independent contractor litigation to yet another large corporate cleaning franchise.

Jani-King is a large national cleaning franchise system, and it is a competitor of Coverall with similar business operations.  A putative class of plaintiffs (represented by the same plaintiffs’ counsel who participated in the Coverall litigation) filed similar claims against Jani-King alleging misclassification of Jani-King franchisees as independent contractors, rather than employees.

Although not entirely unexpected given the similarity between Coverall’s and Jani-King’s businesses, this ruling shows that the impact of the Coverall decision on other franchise systems continues to grow.  Franchise systems should carefully review their business operations to ensure that their business practices do not create unexpected liability for misclassification claims.
Posted by Charles F. Luce, Jr. at 1:57 PM

Firehouse Subs Gets Burned On Suit For Trademark Infringement

Franchisors are well-advised to vigorously protect their brand name, one of a franchisor’s most valuable assets.  However, before filing suit against a franchisee for using a franchisor’s trademark, a franchisor needs to make sure its own intellectual property house is in order, or, as Firehouse Subs recently learned, the lawsuit may backfire.

In Firehouse Restaurant Group, Inc. d/b/a Firehouse Subs v. Scurmont LLC, Case No. 4:09-CV-00618-RBH, Bus. Franchise Guide (CCH) 14,738 (D.S.C. Oct. 17, 2011), Firehouse Subs sued two South Carolina franchisees for trademark infringement for operating two non-franchise restaurants using names incorporating the Firehouse mark.  The franchisees fought fire with fire:  seeking a declaratory judgment that they had not infringed the marks, and filing a counterclaim seeking to cancel Firehouse’s trademark due to its alleged fraud on the U.S. Patent & Trademark Office (USPTO) when Firehouse obtained its mark.  At trial, the jury agreed with the franchisees, finding that the defendants had not infringed Firehouse Subs’ trademarks, and that Firehouse Subs had defrauded the USPTO.

Firehouse Subs tried to douse the flames, filing a motion for a new trial, or, alternatively, for a new trial.  However, the U.S. District Court for South Carolina upheld the jury verdict.  The court found that the franchisees had presented adequate evidence that Firehouse Subs knew of a restaurant in Florida operating under the name “Firehouse Grill & Pub” at the time it filed its application for its trademark; however, Firehouse had falsely represented to the USPTO that no other party had the right to use the “Firehouse” mark.  Moreover, in light of evidence that Firehouse Subs unsuccessfully sought to obtain a coexistence agreement with the owners of “Firehouse Grill & Pub” (showing that Firehouse Subs was concerned about the possibility of confusion with the Firehouse Subs trademark), the court also affirmed the jury’s award of nearly $250,000 in attorneys’ fees to the franchisees because the jury’s finding of fraud upon the USPTO rendered the case “exceptional” under the Lanham Act.


Recent litigation in the United States has examined issues relating to franchise systems imposing price ceilings on items sold by franchisees, even when those ceilings mandate that items are sold at a loss.  In a notable case, National Franchisee Association v. Burger King Corp., the United States District Court for the Southern District of Florida in 2010 affirmed the right of Burger King to impose a $1 price ceiling on its “Buck Double”  cheeseburger, even though the cost to franchisees producing that cheeseburger were higher than $1.  Essentially, the court agreed with Burger King’s argument that enforcing such price ceilings is a reasonable strategy to draw in other customers in to purchase higher price items, essentially acting as a “loss leader” to benefit overall store sales.

This legal precedent for allowing franchisors to enforce maximum, below-cost price ceilings appears to have migrated north of the border.  Recently, an association of Tim Horton’s franchisees filed a class action against the franchisor requirement that franchisees sell lunch item menus for less than cost.  Echoing the holding in the Burger King case, the Canadian court embraced Tim Horton’s arguments that the applicable analysis involves the overall profitability of the franchise store, rather than the individual profitability of a single item.  The court found that it was commercially reasonable for Tim Horton’s to adopt and enforce a strategy on its franchisees to use below cost lunch menu item as a loss leader to bring in customers and create additional profit on other items.

The adoption of the “loss leader” concept in the context of maximum price ceilings in the Canadian courts may demonstrate a trend towards greater franchisor control and discretion and the pricing of specified menu items system-wide.
Posted by Charles F. Luce, Jr. at 5:59 AM

A major case of interest in the franchise industry continues to wind its way through the federal district court and state courts in Massachusetts.  In Awuah v. Coverall (the “Coverall case”,  the core dispute involves whether Coverall franchisees are actually classified as employees, rather than independent contractors.  More explanation of the core dispute is covered in a prior blog entry, “Franchisees: Independent Contractors or Employees?” by Bud Culp, posted below.

In the Coverall case, presiding federal district court has now entered an order defining the damages that the Coverall franchisees who were misclassified as independent contractors rather than employees will ultimately receive.  The successful plaintiff franchisees are allowed to recover damages against Coverall which include refunds of their initial franchise fees, additional business fees and insurance deductions.  Also, the plaintiff franchisees can recover any unreimbursed chargebacks and interest on late payment of reimbursed chargebacks.

Most importantly, however, the judge issued an order which trebled the damages assessed against Coverall.  The court took this action under the prior 2007 version of the applicable Massachusetts statute which makes treble damages discretionary.  The judge’s order trebles damages against Coverall for successful plaintiff-franchisees dating back to 2006.

It is important to note that revisions to the Massachusetts statute in 2008 now make the trebling of damages for misclassification mandatory, rather than discretionary.  This change in the law, along with Coverall case precedent, should impress upon franchise systems the importance of properly evaluating any potential exposure they may face on the issue of whether their franchisees can be classified as employees, rather than independent contractors.
Posted by Charles F. Luce, Jr. at 5:50 AM

To learn more about our services, please visit our website.